The Sledding Hill As a Metaphor For Life 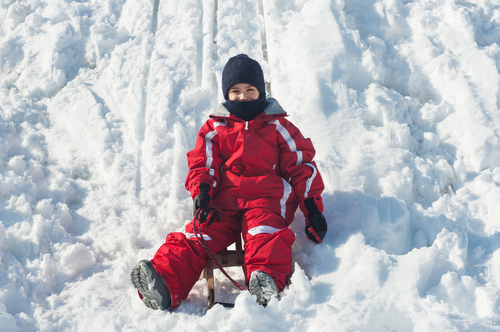 While many people lament the arrival of snow, this intrepid gal welcomes it. After all, if it’s going to be cold, at least snow expands your recreation options. (And, frankly, there are only so many board games, cooking projects and G-rated movie watching I can do with my kids before I seriously lose my mind.)

One recent Saturday we were blessed with about 5 inches of precipitation. The girls greeted the falling flakes with exuberance. With Saturday ahead of us, and the promise of accumulation, there were heated discussions about which sledding hill to hit first and the merits of each. Feeling adventurous, I posited we try someplace new. We decided on a hill in north Appleton, about 20 miles from home.

After suiting up, we piled into the car and threw the sleds in the back. As we headed down the highway, we alternately talked about the upcoming fun and sung along with the radio, everyone feeling upbeat.

Upon arrival, however, it was obvious that we were not the only ones with the idea to hit the hill. At least 20 groups of people were already there, giving it a whirl. And while I couldn’t have expected to have the hill to ourselves, I was more than a little irritated by the lack of sledding etiquette being exhibited, specifically the tendency by too many to not exit the hill promptly after stopping at the bottom.

Why is it that so many feel the need to linger after the ride? When that happens, those of us at the top have to wait an inordinately long time before launching, or we risk crashing into the lurkers. I give very young children a pass on this as they simply don’t have the experience or the awareness of the larger world around them to realize that they are in the way. But middle- and high-school-age students, and even adults who clearly should know better? No thank you.

Because our girls are polite to a fault, they tend to wait for the “all clear” when it comes to many things in life. But after about three runs of this nonsense, we gave them the go-ahead to “man up,” as it were.

“Just go. If they don’t move out of the way and you crash into them, that’ll teach ‘em,” we said. They looked at us dubiously. “Girls, just go! You’ll be fine,” I said, gritting my teeth. (OK, probably not the best example to set, but the cold, wind and cardiac arrest-inducing ascent to the top of the hill following each run apparently were bringing out the worst. Also, I did not feel like spending the majority of my day on a sledding hill NOT sledding.)

And with that, they launched, our eldest twirling her plastic saucer in circles, while the youngest shot ahead on her purple missile, hell bent for destruction. Confident and fearless, they deftly avoided several collisions. And when they stopped moving, they jumped up laughing, quickly making their way to the side of the hill.

It was a proud parenting moment.

Sure, it may not have come about in the sweetest of ways, but our intentions were good. The overriding motivation in all my interactions with my kids is to raise independent, confident people who are prepared at 18 years old to enter a crazy and sometimes dangerous world — children who are aware of the bigger picture and consider the feelings of others, but not so much that it hinders them or causes them to doubt themselves.

The sledding hill is an apt metaphor for life: sure, it can be a scary ride at times, but that’s not necessarily a bad thing. The trials are the great teachers. How you land is irrelevant. How quickly you move onto the next adventure is what really matters.