Mud Room, you complete me 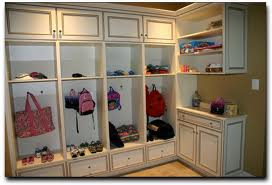 I’m convinced that my family’s collection of boots, snow pants, mittens and hats reproduces each night. The sheer volume of stuff, coupled with a lack of adequate storage space, make keeping our entryway neat and organized nearly impossible, thus threatening my already tenuous hold on sanity. Then, just when I think I have a handle on it, a fresh blanket of snow falls, beckoning the kids outdoors to start the cycle anew.

Because our home is not equipped with a true mud room, I’ve done some creative finagling to achieve some semblance of organization in the laundry room, the de facto outerwear repository. It’s only about 8’x6’, and with a sink, washer and dryer included, space is at a premium.

One thing that helps was the addition of a couple of inexpensive boot trays, which corral moisture and protect the tile floor from becoming a bigger safety hazard than it already is.

Another thing we did to maximize space was remove the countertop in the room. Originally intended as a surface on which to fold clothes, it became apparent after a few weeks in that it was wasted on me, who prefers to fold clothes in the bedroom while watching TV. In its place, my husband installed two rows of wall-mounted coat hooks, one row lower down on the wall to accommodate our youngest and her limited reach, and another higher up for adult-sized clothes and larger, longer items. We chose hardware that could adequately support heftier winter outerwear vs. more decorative [read flimsy] hooks.

Another addition was a wooden drying rack, which can be folded and stored away when not in use. While it’s a bit larger than I’d like, it’s great for wet hats and mittens and the occasional sweater that needs to be air dried.

One thing the space lacks is proper seating. That is, I’d love a bench with built in storage compartments, like the ones shown here, on which we could sit to remove shoes and boots at our leisure. In addition to the practical uses, such a feature strikes me as something more genteel people have, even though I know having one would not transform my chaotic abode into something you’d read about in an Austen novel.

Getting back to storage, we do have a wire shelf above the washer and dryer. It can hold some lighter- weight items, like linens, but because it’s open you have to be conscious of the aesthetic.
Ideally, I’d do this, but time and budget will probably call for something more like this. I really like the color of the appliances and matching cabinets, and the backsplash detail between the base and the wall cabinet makes the small space seem much more interesting. Plus, you can just close the door on the whole thing when you feel like it — out of sight, out of mind.

So, DIY’ers, what say ye about mud rooms? Do you have one? Or do you covet one like I do? What creative things have you done to wrangle the beast that is kids’ outerwear? Hit me up in the comments below.