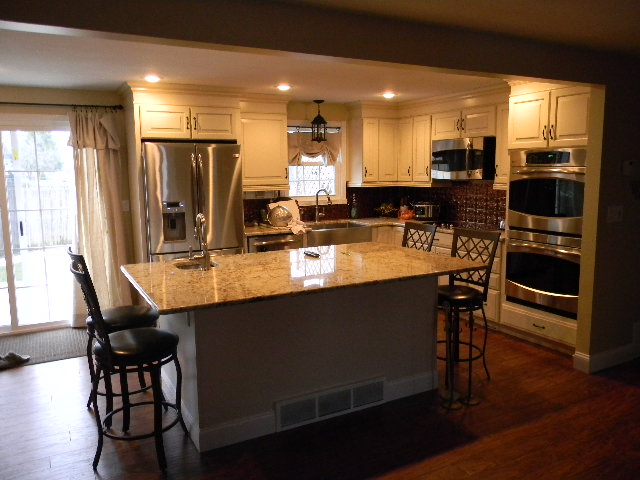 From time to time, I’ll post a project profile that one of our customers completed. This post is about Danelle’s dramatic kitchen remodel, and how she used Fasade kitchen backsplash as the pièce de rèsistance to her stunning new space.

To see the “after” photos of Danelle Anderson’s kitchen remodel, you’d never know that the project was, as she terms it, “a labor of love done on the strictest budget possible.”

Looking like something you’d see in a high-end design magazine, the room is a testament to her resolve in the face of a number of challenges, the biggest of which occurred several years ago in her Syracuse, N.Y. home.

“We have a bathroom right above the kitchen and had a plumbing leak about seven years ago,” she explains. “So of course our money went into fixing that and what was left behind was a big hole in our ceiling drywall right above where the kitchen sink used to be. After many long years of living with the eyesore in the kitchen ceiling and dreaming about someday having a kitchen that was functional and pleasing to the eyes, I began to do my research.”

Danelle called in four contractors to give her estimates for the job. The original kitchen was a U shape with a small entry dividing it from the living room. She wondered if the wall could be removed to open up the space and make it more conducive to entertaining. “I didn’t want to be stuck in the corner cooking by myself while everyone else was socializing,” she says.

Two contractors said yes, the wall could go. Two others disagreed, however, saying the wall was load bearing and needed to stay. Their quotes ranged from $10,000 to $40,000. “But I didn’t have a good feeling about any of them,” Danelle says. “I quickly realized I’d be doing this on my own and that’s how this monster was created.”

Danelle decided to go with another contractor altogether, who removed the wall and installed a beam across the room to open up the space. She chose crème colored cabinets by Timberlake and designed their layout on the manufacturer’s website. The cabinets frame a new window on the exterior wall, with the sink repositioned underneath. “Because who doesn’t want to look outside to do the dishes?” she reasons.

She also decided to add double ovens, a 5-burner cooktop, dishwasher, microwave and refrigerator, which she ordered off the GE Appliances website, earning a $500 gift card for purchasing more than three appliances during a promotion that ran at the time.

Then it was hurry up and wait for the next six months, as contractors rerouted plumbing, electrical and HVAC, installed new drywall and flooring and redid the ceilings and installed lighting. Nine months after it all began, the cabinets and window were installed, the appliances went in and countertops and sinks were installed.

No sooner had Danelle thought she could see the light at the end of the tunnel when she realized two things were missing: hardware for the cabinets and a kitchen backsplash.

“I panicked because there wasn’t anything left in the budget for a backsplash,” she says. “I knew I wasn’t going to put up tile because it’s expensive and it’s annoying to have to clean spattered cake batter off all the grout lines in a tile backsplash. Tile is not convenient to clean and, frankly, boring. Everyone does it so I knew for sure I didn’t want that.”

After doing some research online, Danelle discovered Fasade backsplash panels. Fasade decorative thermoplastic panels resist water, impacts and stains, and give homeowners a designer look for a fraction of the cost of other backsplash products. Available in 13 different styles ranging from traditional to modern to industrial, and 20 different finishes, this unique kitchen backsplash product is perfect for the DIY enthusiast who wants a high-impact look with quick and easy installation.

Danelle ordered samples from backsplashideas.com and was pleased with the different styles she received. In the end she chose Traditional 1 kitchen backsplash in Oil-Rubbed Bronze.

“I kept the sample up on the wall for a couple days so I could see it in every light and I loved it more and more as they days went by. So I ordered it online and it arrived in three days,” she says. “My contractor put it up and he said it was very easy to install even though it was his first time using the product. He also said he was pleasantly surprised and wanted to put it into his own home.”

Danelle said she loves how the backsplash looks and how it’s so easy to clean. “Everyone that comes to the house raves about it,” she says. “They say it completes the kitchen and I couldn’t agree more. It really is the icing on the cake. I truly couldn’t be more pleased with the quality, look and affordability of this product.”