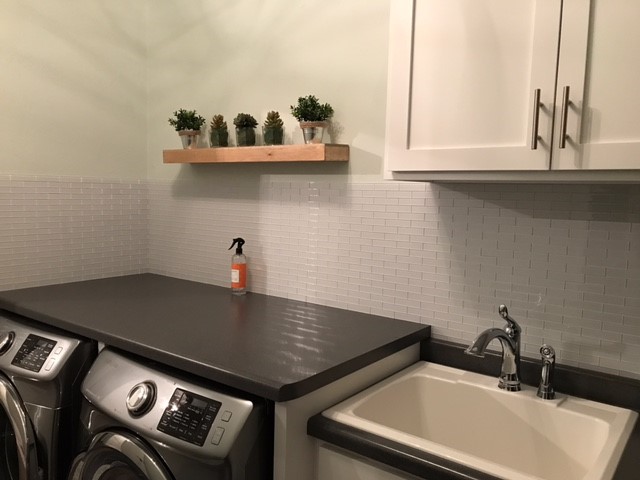 Like builder-grade homes, builder-grade RVs can lack personality. However, they too can be customized to reflect individual needs and style.

Scottie recently took the time to transform an RV. She points out on Saved By Scottie that RVs require everything on a smaller scale (aesthetically and in terms of weight). Things can get bumpy during travel, so items need to be fastened securely for safety.

Scottie chose to transform the RV’s kitchen and the bedroom. She used two Aspect Peel & Stick products: our Mini Subway glass tiles in Frost and our stone tiles in Weathered Quartz.

Mini Subway is the perfect size for a small space like the kitchen. In addition to the adhesive backing, she used construction adhesive for extra insurance. That project complete, she moved to the bedroom project.

Aspect stone is real stone. We pour a resin onto a large quarried stone and after it cures, we peel the resin back to reveal the natural colors and textures. Then thin slabs of stone are cut and arranged on pressure-sensitive adhesive backers cut to the tile dimensions. It’s thin enough to cut with tin snips.

Once completed, Scottie said, “It makes a stunning statement and is even easier to use than the glass. This space went up super quick since it was just one big rectangle.”

Check out the whole post and let me know what you think of this amazing project in the comments.

Doing laundry typically isn’t most people’s idea of fun, but doing it in a beautiful, clean space makes it more tolerable.

So when Nicole was building her home, she knew she wanted to incorporate Aspect tiles that reflect her design aesthetic.

She chose Aspect Mini Subway tiles in Frost as one of those materials. The glass tiles feature peel and stick installation and are an easy way to add style to any space.

“I was going for clean look for my laundry room, but wanted to mix in my farmhouse style and have it flow well with the rest of the house,” she explains. “I love the look of subway tile. The kitchen has a ceramic herringbone and I wanted to keep the look similar, but also have it stand out on its own. I like the smaller version of the subway look with these Aspect tiles. The glass was so clean.”

“I have a lot of old Victorian plumbing fixtures in my kitchen and baths mixed with the farmhouse look. We also brought in a craftsman look with the exterior, as well as the interior trim and doors,” she says.

Nicole loves the way her laundry room turned out. “I thought the product was great, and the tile installer said it was very easy to work with.”

What do you think of this look? Let us know in the comments!